The Heavyweight Lifter in Space

NASA’s Space Launch System (SLS) is the largest, most powerful rocket ever built. It’s also one of the heaviest. Weighing in at SIX MILLION pounds, the SLS rocket represents the next generation of aerospace innovation in weight and performance. 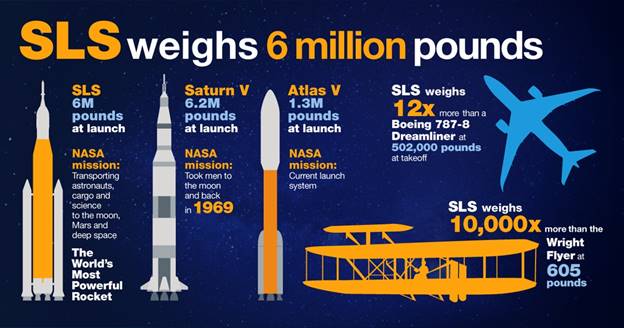 The SLS Rocket needs significant power to transport astronauts, cargo, and science experiments to the Moon, Mars, and Deep Space. To put that into perspective, that is 12 times as heavy as a 787-8 Dreamliner and 10,000 times heavier than the Wright Flyer!

NASA’s SLS Rocket is a heavyweight lifter in space travel that will be the premier vehicle to deliver the United States into the next generation of Deep Space exploration.