Canadian airplane maker Bombardier sold its C-Series jets to a U.S. airline for well below what they charge in Canada to secure a sale and what it costs to manufacture them. This is a classic case of “dumping,” which is illegal under international trade law.

Why is all of this important? Hundreds of thousands of American jobs at are stake.

Here are the top five reasons you should be concerned about “dumping”:

Bombardier “dumped” its airplanes in America. Companies do this to gain market share. 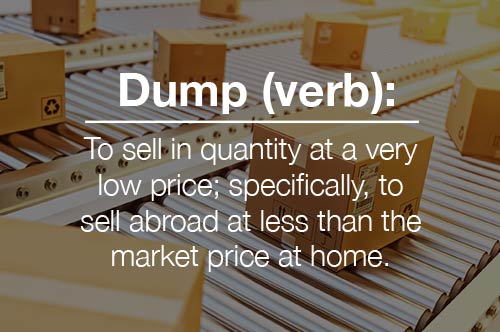 “Dumping” is illegal under international trade law because it hurts workers in the receiving country — in this case, American jobs are at stake.

The Bombardier C-Series and the Boeing 737-700/Max 7 aircrafts are direct competitors. In fact, these aircraft recently competed head-to-head for a 2016 United Airlines contract.

Throughout the country, the Boeing 737 program alone generates an annual economic impact of more than $22 billion, supporting 300,000 total U.S. jobs and partnering with more than 300 suppliers in 41 states.

Bombardier’s actions — trying to illegally “dump” their competing aircraft in the U.S. for an artificially low cost — puts all of those jobs in jeopardy.

3. This case is not about stifling competition. It is about making sure EVERYONE plays by the rules.

As columnist George Landrith wrote in The Hill newspaper, “When only the U.S. abides by free trade agreements and our trading partners cheat, American workers suffer.”

Global trade only works if everyone plays by the rules.

4. American manufacturers have been hurt by cheating before.

Airbus has been at it for 40 years, capturing half the global market for large commercial aircraft with massive illegal subsidies from European governments.

In 2011, the World Trade Organization (WTO) ruled European airplane maker Airbus had received $18 billion in illegal government subsidies. And in 2016, the WTO found Airbus had not only failed to comply with the previous ruling, but they had benefitted from an additional $5 billion in launch aid for the A350 aircraft.

These illegal actions cost American-based aerospace manufacturers and suppliers billions of dollars in sales as well as the hundreds of thousands of American jobs those sales would have supported.

Competition is good, and fair competition is what drives companies to innovate and give consumers the best experience.

But the kind of competition coming from foreign companies like Bombardier and Airbus is underhanded and not going to benefit end users. Airlines and airplane travelers would be better off if all manufacturers played by the same set of rules. It would encourage each company to out-innovate each other on things like fuel economy, engineering, cabin design and vehicle performance. Those are what should determine competition winners, not illegal government subsidized pricing.

Foreign Companies Mock U.S. Trade Law — Do We Even Notice?