The Most Powerful Rocket Ever Built

Our fascination with space spans generations. For more than 100 years, humans have dreamed of going to the Moon and exploring the farthest reaches of our galaxy.

Technological advancements have made deep space exploration more possible than ever. There’s no better example than NASA’s Space Launch System (SLS), the largest, most powerful rocket ever built. 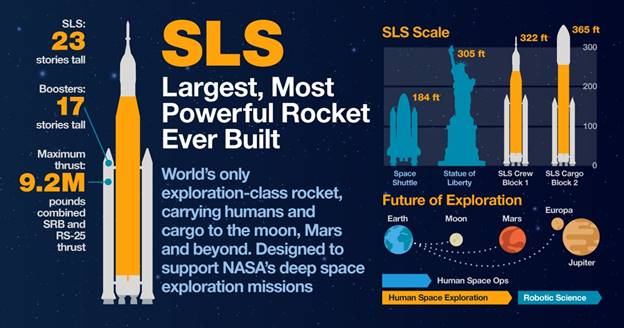 SLS is designed for deep space, with rocket boosters 17 stories tall and enough thrust to launch more than 26 metric tons to the Moon and beyond. This incredible rocket’s four engines use propellant at the rate of 15,000 gallons per second. That’s enough to drain an Olympic size swimming pool during launch.

SLS is the future of deep space exploration, and a critical part of NASA’s Artemis program. It will be the vehicle that delivers humans and cargo to the Moon and beyond, as well as transports the dreams of millions of Americans to places in our galaxy we’ve only ever been able to dream about… until now.