How does a space program from 50 years ago affect the cutting-edge spacecraft set to take flight in 2019?

Just ask Chris Ferguson, a Boeing astronaut who commanded the final space shuttle mission, who is now slated to fly on the Starliner. The veteran astronaut says that the work done on Apollo 11 continues to inspire the engineering behind the Starliner today. 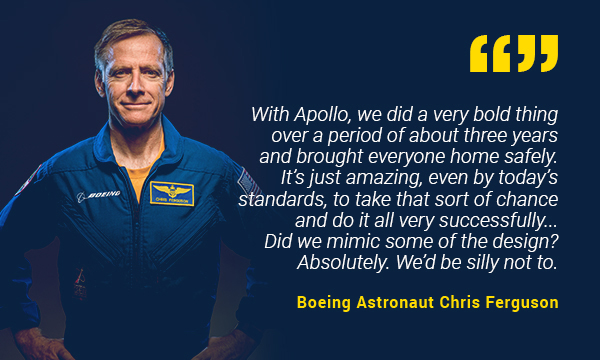 “I remember Walter Cronkite, being with my parents, and making little sketches — modules, rockets, and astronauts. I was just a young boy taken up with the coolest thing that seemed to be going on in the world.”

With the 50th anniversary of Apollo 11 in the rearview mirror, the Starliner is set to take center stage in America’s race to enter the new space age.

Learn more about Boeing astronaut Chris Ferguson and the Starliner.