Bigger Than The Apollo Program

Earlier this month, Boeing Chairman, President and CEO Dennis Muilenburg discussed the innovation driving Boeing’s and America’s next generation of exploration, which includes a return to the moon and putting American astronauts on Mars. Boeing’s work with NASA to build the Space Launch System (SLS) will send American astronauts farther and enable a new frontier in space exploration. 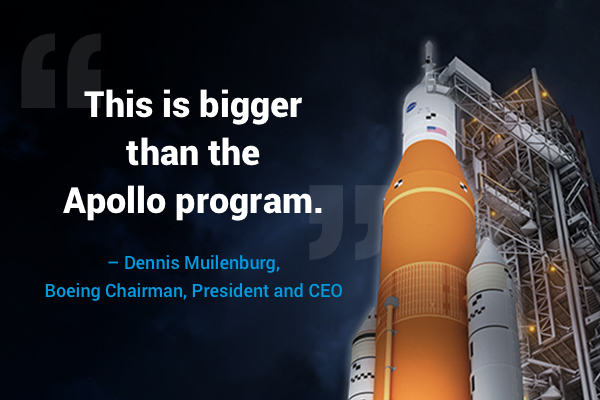 In addition to NASA’s leadership, smart public policy that supports our space workforce and industry is key to driving the innovation engine.

In a panel discussion at the Business Roundtable CEO Innovation Summit, Muilenburg laid out some of the driving forces that will take humans and technology farther than they’ve ever been in space, deliver passenger air vehicles into our transportation systems and sustain American innovation for decades to come: STEM education, tax reform, and a consistent federal budget and regulatory system.