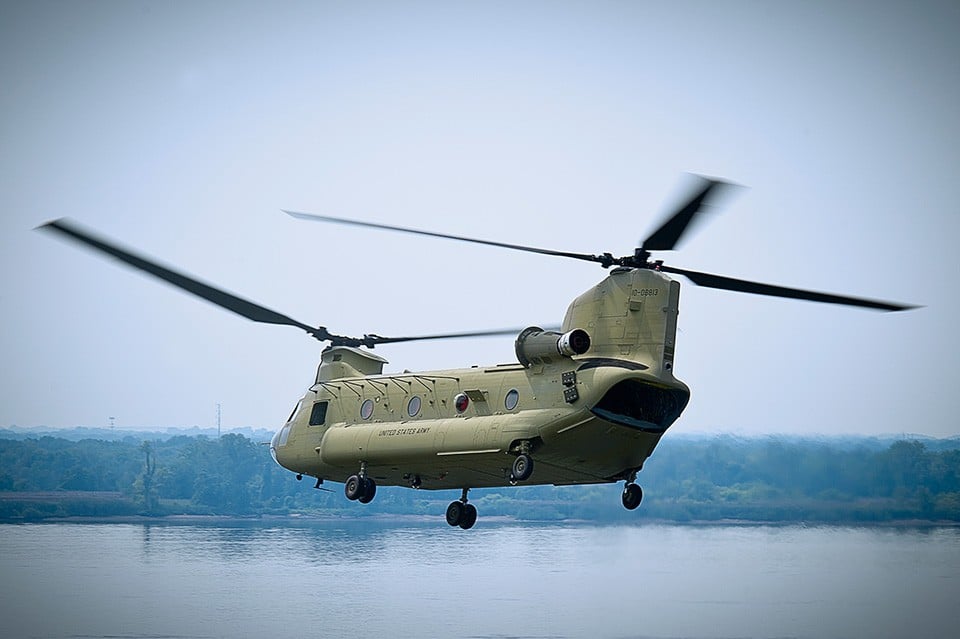 Whether it’s fighting devastating forest fires in California, conducting dangerous, emergency medical evacuations in Mali, or supporting our troops in conflict zones, Boeing’s H-47 Chinook delivers the tools to succeed in hotspots around the globe.

The Chinook is an advanced multi-mission helicopter that serves as a primary transport and heavy-lift aircraft for the U.S. Army. Its massive size, tandem rotors and advanced airframe allow it to safely carry soldiers, weapons, and equipment into active combat zones. But this amazing helicopter can do so much more than just carry troops and equipment from point A to point B.

Want to know more about this incredible aircraft? Watch U.S. Fly takes a behind-the-scenes look at the 8 most important things to know about Boeing’s H-47 Chinook.

1. The Chinook’s partnership with the U.S. Army goes back decades.

Since the early 1960’s, generations of American warfighters and their equipment traveled through dangerous airspace on the Chinook.

2. The Chinook takes on the most dangerous rescue missions in the world.

Because of its unique and advanced tandem-rotor technology, the Chinook can handle the most dangerous and difficult rescue missions that require higher altitudes, heavier equipment, and variable weather conditions. Earlier this year, a Chinook helicopter performed a “pinnacle landing”, where only its rear wheels set down, to rescue a climber on Mt. Hood — Oregon’s highest peak at 11,239 feet.

International peacekeepers rely on the Chinook’s advanced flight control system and digital cockpit to conduct security operations and emergency medical evacuations in global hotspots like Mali — one of the most dangerous regions in the world for UN forces.

The Chinook’s huge size has seats for 33 soldiers – not including its three-man operating crew – and allows it to carry up to 100 people overall! This incredible size and heavy-lift capability allows the Chinook to transport relief supplies in an emergency and provide mass evacuations for refugees.

5. Firefighters around the world use the Chinook to fight wildfires.

From the Netherlands to California, the Chinook’s heavy-lift capabilities help put out fires and save lives. Chinooks in “flying fire brigades” carry buckets that can transport over 3,000 gallons of water or flame retardant — the equivalent of a small swimming pool.

6. The Chinook is a lot faster than you expect.

Despite its huge size, the Chinook moves quick and far. It can reach up to 184 MPH and has a range of nearly 400 miles.

7. The Chinook is a heavy-lifter for American jobs.

Nearly 360 suppliers in more than 40 states are committed to delivering the Chinook to the U.S. military and international customers — this means over 20,000 American jobs.

8. MAJOR upgrades may be coming soon.

The next-generation Chinook Block II will increase its lifting power by 1,500 pounds – enough to fly faster, heavier, and higher to keep America’s troops safer. This would make the Chinook the only helicopter capable of lifting either the Army’s fully-armored Joint Light Tactical Vehicle (JLTV) or the Army’s M777ER Howitzer with a full load of ammo and soldiers — and allow the helicopter to continue operating in the harshest conditions in the world.

The Chinook’s versatility makes it a unique asset to the U.S. Army, humanitarian missions, emergency personnel, evacuation and firefighters all over the world. Watch U.S. Fly will keep you up to date with behind-the-scenes information on the helicopter’s amazing feats and newest upgrades.